On June 27, I had a late night playing with the Kim Richmond Concert Jazz Orchestra. (I know why he calls it an orchestra, but the bass and guitar being the only strings, it hardly qualifies.) 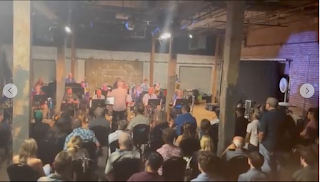 Normally this isn't a problem but the next morning I had to head up to the Bay Area for Asian Improv aRts 35th anniversary and co-founder Francis Wong's retirement celebration. I had to leave home significantly later than I prefer, which is between 3:00 & 4:00 AM. I was conflicted about stopping in Taft for breakfast, but I'm on a bit of a chicken fried steak kick. Taft has at least one other reviewed restaurant for that item. As far as I knew, this trip would be my last taking that route for awhile. I decided to get a good night's sleep, stop and enjoy my breakfast. I'd get to San Francisco when I got there.

This chicken fried steak was from "The Same Place," cafe. A smaller place than Jo's Diner and no booths. So if somebody wants to talk to you, they can. And they did. Well, one of them did. He heard me tell one of the somewhat confused wait persons (I can't imagine why she was confused.), that I had come there specifically to try the chicken fried steak. He told me that he didn't really like the chicken fried steak at this establishment. It was too chopped for him. He told me what for him, was the best item on the menu. It is a sandwich, which I hope to try someday. He was right about the steak, it was indeed chopped. Or ground. Mixed with onion and spices, reformed and cooked. I liked it. I guess if you can call Salisbury Steak a steak, you can call what I had a steak. Again, I liked it. But I liked the gravy better. The gravy was especially excellent. It was a good thing that I had ordered biscuits and gravy as a side. The cafe sells jellies made by a woman in Maricopa. (There is a cafe in Maricopa that I hope to try before too long.) Anyway, the proceeds from the sale of the jellies go to the Maricopa Community Church. I didn't care about that, but since the fruit used was probably local, I figured I had better get some. I've gone through the blackberry, almost done with the pomegranate and looking forward to the strawberry. 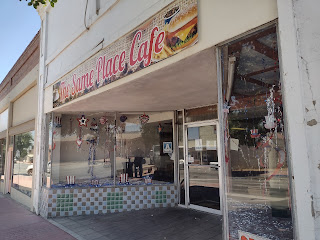 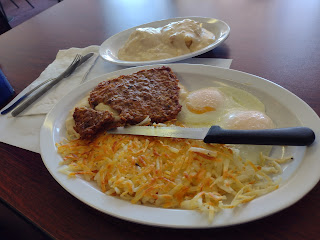 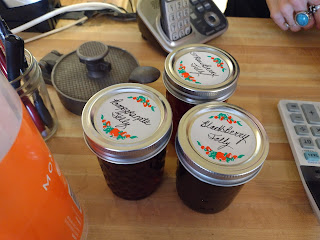