Q. What is a universally understood phrase for despair and frustration?
A. Japanese language class.

Sure, there are other difficult languages. People tell me English is harder to learn. I won't argue. I won't even go much further into this, beyond saying that it is really difficult. Do a little research and you'll find that the language is something of a stand alone, not really closely related to the languages of the countries around it. I could rant for a long time about how much effort I expend trying to wrap my head around it, instead I'll just move on.

I've been doing various things to get myself familiar with Japanese culture. One of the most interesting has been discovering podcasts. The ones I have listened to the most have been of English-speaking persons living for extended periods in Japan.

They have proven to be very informative and entertaining. At least one of them I'd listen to even if I were not going to Nihon (Japan). Here are my three favorites, should you want to give them a try. By-the-way, I download all of these via iTunes, so you can just put the title in the iTunes Store search field, but I'll put the URL.
1. "The Japanofiles Podcast." http://japanofiles.libsyn.com/  Produced from 2009 − 2011, host David Carlson interviews other English-speaking residents or visitors in the area around Matsumoto. His are the most serious and involved of the podcasts, probably because he is obviously an old guy. These podcast are all audio.
2. "A Year In Japan."  http://www.ayearinjapan.com/. For some reason not all of the episodes are
available on iTunes and their website is confusing. That is unfortunate, because they are the funniest of the three. Very silly, in fact. But they have some interesting interviews. For example, they interviewed a Western woman who does hostess dancing in Japan. You are not going to get material like that on Dave Carlson's podcast. They also have a youtube channel: search "Joseph Tame, The Daily Mumble."
3. The one I found most recently is "Finding Japan." http://www.findingjapan.com. These were done by a younger guy, or couple of guys. They are not as crazy as the two guys in "A Year In Japan," but just as informative. They also have a lot of video, a lot of it short.

I'm doing a CD to take along with me. It was recorded back in 1998. It's been "sitting on the shelf," as they say. Never seemed quite the right time to put it out and now the CD era is over. I am having them duplicated rather than replicated; just enough to take along. When I get back I'll release it online. It is a trio recording, the late Glenn Horiuchi, Francis Wong and myself. I've named us the Geodetic Trio. The project's title is Cartography (人生の地図). It contains a composition each by Glenn and Francis and two by myself. It has always been one of my favorite projects. It should be perfect for the mid-level gifts R. Rudich told me I need to bring with me.
Posted by Roperadope at 12:34 AM 1 comment:

I guess I can chalk the trip up as a success even before I leave the country. Sunday morning I got an e-mail from D. Rothman asking if I wanted to do a program on his series, based on my Japan project.  D. Rothman is the founder and Artistic Director of Beyond Baroque's Beyond Music Series. It happens the last Saturday of the month from September through June. Beyond Baroque is an historic independent literary arts center located in the old Venice, CA, city hall building. They have hosted Rothman's new music series for several years now. I performed a concert with my ensemble Judicanti Responsura in the inaugural year of this series dedicated to new music. On April 26, 2014, I'll be back presenting a program of, I don't know what. I only know that it will have something to do with this trip to Japan. With any luck, I'll be presenting some new compositions composed there or after I come back based on the sojourn.

So, have you figured it out by now? Yes, I'm going to Japan as a composer. My proposal was to set some poetry to music. I will do this. I will also do a lot cultural experiencing in the process. Whether I actually set the poetry to music or create music based on and inspired by the poems remains to be seen. I'll see how the ideas come once I have been there for awhile. I am always a little dubious about these kinds of projects. The deal is that you win the award based on an idea, a concept of what you would like to do, something you might do. Then by some miracle you win the award and all of a sudden you have to produce. The idea has to become a reality. Well, here I am again. I have to come up with something. Doubly so, because I accepted the concert offer. Guess I had better buy some manuscript paper, pencils and lots of erasers.

In less than four weeks I am off to Japan. I've never been there before, I don't speak Japanese and I'll be there for 90 days. Basically, I'll be on my own. There will be some support, but mostly I am going to be a stranger in a strange land. Exciting. I guess. Yes, very exciting; I'll just face the challenges as they come. There will be many. There have already been many.

I am posting here rather than a site like Facebook. I figure people will only come here if they want to. We know how it can get on Facebook...I don't want to be that guy. I don't know how regular these posts will be, just check back occasionally. I think I'll have connectivity the whole time I am there and will post as many interesting shots as I can manage.

In later posts I'll explain what the whole trip is about and what I am supposed to be doing. For now, here's a clue: 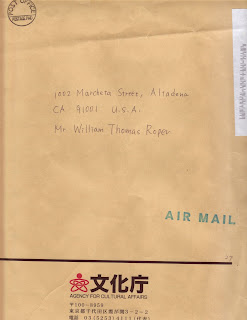 Yeah, I'm kind of official. More later, now I have to go practice.

P.S. As should be obvious, this blog will be very casual in its tone.