I have done a lot of gigs at Typhoon lately. Typhoon is one of the few clubs in the Los Angeles area that will host a big band. It is pretty tight onstage. The place wasn't built for it. The pay hardly bares mentioning, but we get fed. Its an Asian-fusion kitchen. This is not the restaurant that was busted because two of the chefs were serving whale meat on the sly. That was "The Hump," but they are owned by the same parent company, "Typhoon Restaurant, Inc.," which is how the confusion comes in. They do serve crickets. I ordered the crickets once, because I just had to. They were very tasty. They were deep fried and served mixed in with shoe-string potatoes, so everything was very crispy and salty. You could almost pretend that you weren't eating insects. Unless you looked at what you were eating, then there was no doubt, you were eatin' bugs!

Getting to Typhoon is one of those traffic-challenged excursions; it is in Santa Monica, located just off the runway of the airport. For a recent performance with the Kim Richmond Concert Jazz Orchestra, I got out there early enough to take a walk on the pier and along the beachfront.


Back in the old days, Los Angeles was segregated like pretty much every place else in this country. Below is a shot of what was known as "The Inkwell," the portion of Santa Monica Beach that Black folks could go to. Click "here" to link to an article on "The Inkwell." Click "here" to link to some vintage photos of "The Inkwell." I have included some vintage photos of my own. Yes, this is the part of the beach we went to when I was a kid. I didn't know until recently that it was a segregated part of the beach. Officially, I don't think it was segregated when we went there, but you know things can be "officially," and how they are often different in reality.

On July 17, I had an outdoor concert with the San Bernardino Symphony. You could call it a folklorico concert, with singers, a dance troupe and colorful costumes. The concert was in the city of Fontana. This was one of those situations that I went out early enough to do a walk. The orchestra did a concert out there about two years ago, so I know there is a fine bike path that goes right by the park we perform in. It is the Pacific Electric Inland Empire Trail. It is long. Two years ago, I headed west. It was one of those times I went way too far. I barely made it back to change into my concert clothes and get seated before the downbeat. Fontana strikes me as a friendly city. On both walks, practically everyone I passed said "Hello." That is not my usual experience. The mayor is an African American woman. One of my old high school chums tells me that she went to high school with us. I don't remember her, but there are a lot of folks I went to high school with that I don't remember. Some of them would be real hurt if they knew that, but high school was a long time ago.

This year I headed east. Fontana is pretty much the terminus of the path on the eastern end, so I figured there shouldn't be any danger of being late. The main advantage of walking on a bike path is the speed, because it is dedicated. You don't have to worry about traffic, inviting storefronts, beckoning BBQ joints, etc. The disadvantage is that you miss out on exciting things like inviting store fronts, beckoning BBQ joints, etc. Still there is plenty to see.


Another thing I do on these far flung jobs is try to find interesting victuals. In the past few years, I often specifically look for places that sell tamales. I like tamales. I usually buy a dozen and take them home. There is a problem with buying a dozen tamales before doing a four - five mile walk, then a long summer concert. (Summer concerts always seem long, because you are usually playing tune-y music and endless medleys.) The problem is called bacterial growth. The tamales are hot, so they need to be cooled down to room temperature, then cooled further for holding. All of that is very hard to do when they are sitting in the trunk of the auto. I solved this by buying them uncooked, preferably frozen. Then I just throw them in an ice chest with some ice packs and go about my business. By the time I get home they may not still be frozen, but they are still at a safe temperature. I steam and refreeze them. A couple of minutes in the microwave and they are perfect for a quick, anytime meal. Given Southern California's demographic make-up, it is not hard to find places that make tamales. It can be difficult to get them to sell them to me uncooked. At this place in Fontana, the problem was getting the woman to understand what I wanted. English was not her first language. English did not even seem to be her second language. I had to pull a popsicle out of their freezer  unit to get across to her what I wanted. Once she understood, there was no problem. This place was the Leslie Bakery. The tamales were good. If I ever go back to Fontana, I'm going to get more tamales from there.

Posted by Roperadope at 1:08 AM No comments:

Sometimes I get a gig on our nation's birthday, sometimes I don't. This year, I did not. I decided I would be a good citizen anyway, so I bought an all-day pass to ride around on the public transit system. I started later than I wanted, so I didn't get that far. Also, I restricted my vehicles to the light rail trains and a couple of miles on the subway. L.A.'s subway is no longer than a few miles. Figure that. There was a celebration in Exposition Park that I knew about and one downtown. The one in Exposition Park was fairly small. As it turned out, the one downtown looked exciting, but required that I go through a parcel search, a pat-down and I couldn't take a beverage in, so I declined that one and just walked around the Civic Center a bit. This walk took my past Angel's Flight. In the '90's I did a little project related to Angel's Flight. You can read about it HERE. I got back on the subway and ambled around Olvera Street.

In reviewing the photos, I see that I didn't take any shots of the gathering at Exposition Park. Now it seems like a crazy oversight, but I suppose at the time I didn't see anything worth shooting.  Here's the rundown: they had some food trucks, some rides for the kids, a stage with an R & B act while I was there. It was well attended with folks camped out for the day. Most of the crowd was African American. The park is close to my old neighborhood. I have spent a lot of time in that park over the years, both professionally and for leisure. I am kind of surprised to be the age I am and still living in the city I grew up in. I've lived other places, but I am here now. It is not always the most pleasant feeling to be at a location and remember that it was different a long time ago. So different you almost don't remember what it looked like. Of course, sometimes it is hip.

Map of the trip is HERE. 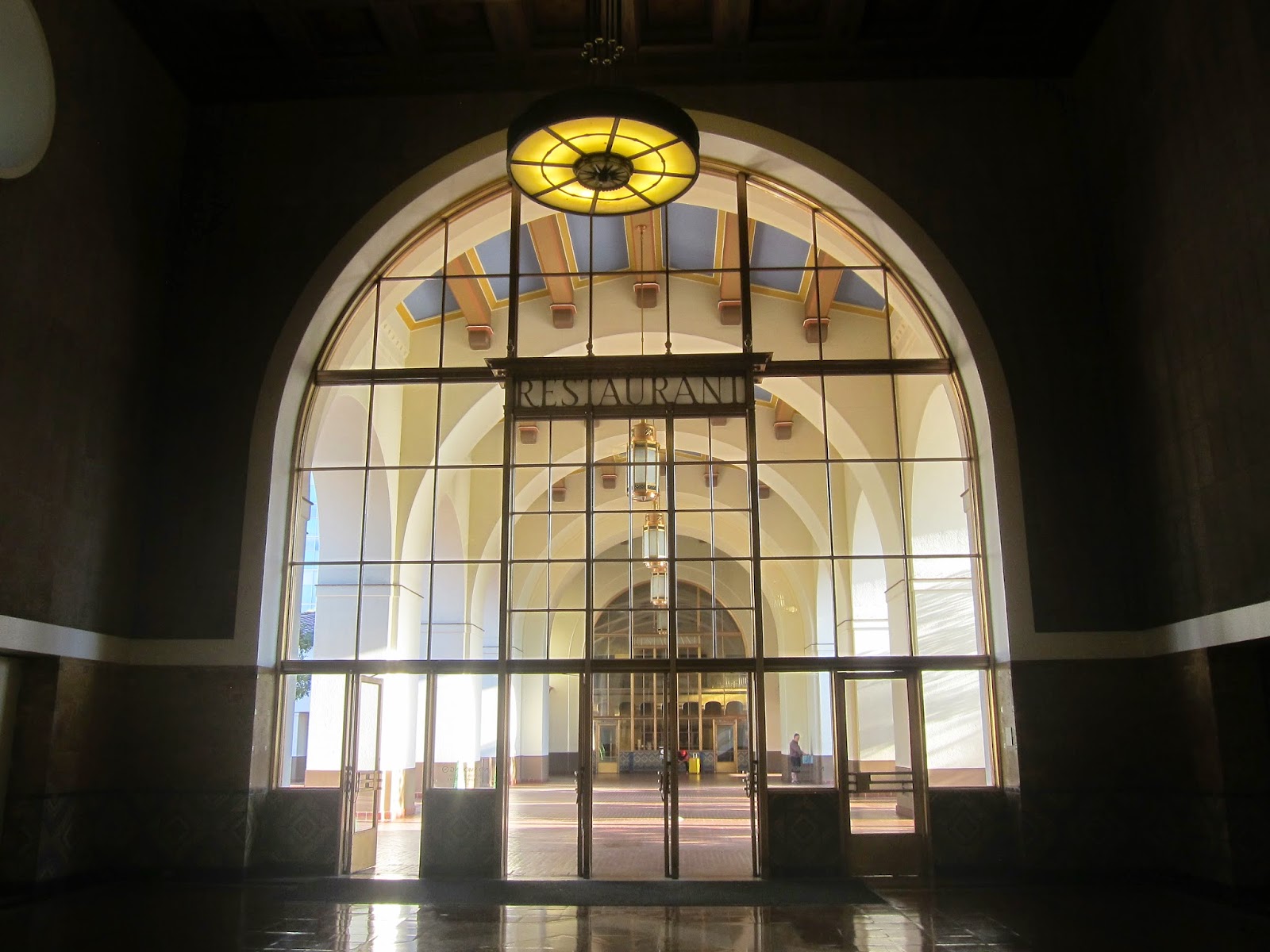 Union Station. Looking out into one of those courtyards that my relatives were photographed.

Posted by Roperadope at 1:19 PM No comments:

Part and parcel of being a free-lance musician is having to go where the work is. The job might be a couple of miles down the street (seldom) or a 100 miles away. The pay is often not commensurate with the distance traveled. So it goes. I have done this for so long (I was the tuba player for the Santa Barbara Symphony my last year of high school), that I have come to make it point to explore the communities that I play in. It gives me a sense of belonging and a feel for the audience. If there is time in my schedule, I'll get to the area of the gig hours before I have set the horns up. This has the added benefit of allowing me to miss the worst of the traffic. If the pay is right and I'm fairly flush in my personal finances, I will sometimes stay the night.

Lately, I've had the occasional gig in the City of San Buenaventura. Most of us just call it Ventura. I also like to play the Tuba Christmas up there. They have a friendly group of low brass players in the region. My last couple of trips up I decided to explore the Emma Wood State Beach, a park I always see from Highway 101, as I head to and from Santa Barbara and beyond. In all these years I've stopped to check it out.

These photos are start from Surfer's Point Park, go along the beach, then across the railroad bridge (which is a big no-no, and I wouldn't want to be on it when a train zips along), down in along the river bank (which I don't recommend as there are numerous homeless encampments down there; only you, them and their dogs), back to the railroad tracks, then Emma Wood State Beach, continuing north along the bike path until I had to turn around. The photos you'll see are a compilation of two hikes (June 6 & 13), but the track on the map is from the second day. You don't see the return path along the beach I took on the first hike, day I came across the rock stacks.

The concerns with doing hikes like this when I still have to play a job is: 1. getting back in time for the gig and 2. not being to exhausted to play a tuba. I haven't really had a problem with the exhaustion, but there have been a couple of times that I showed up way too close to the downbeat for comfort.

Here is the link to the map: "Map Link"

Posted by Roperadope at 12:55 AM No comments: