The End of Yet Another Long Period of No Communication.

Okay, I am back. How many months has it been? I don't even want to think about it. That much time, you know stuff has been happening. I will fill in the blanks eventually, but for now getting started again is what is important. So, this past weekend and week.

It is Obon season. I try to make as many Obons as I can. Usually that is quite a few. This season however, has not been great. I've only made one, at the Pasadena Buddist Temple. Even with it being so close, it was all I could do to get there. And really, I've done so many Obon posts over the years that I wouldn't do another one except for Guzman. Guzman is a Chicano. I'd guess he is in his mid to late thirties. He has a very street/banger persona. I was standing around wondering why I had bothered to come when he walked by and started talking. He was excited. About the Obon. He lives in the neighborhood (like two blocks away), but had never gone to it. He was excited about the family atmosphere and that I a black man was there, along with a fair amount of other black people and white people and Chicanos. He was blown away. We went our separate ways.

Later, my hips started hurting. I needed to sit down. I went toward the tables. Guzman saw me and invited me over. His mother was there. He introduced us. His sister and her child came by and had an exchange. He introduced himself to a Japanese American family. All this time I am checking Guzman out. If you are walking down the street and you saw Guzman walking toward you, you might consider crossing the street. Very banger, very street. I'm looking at him. You know how you're seeing something, but it takes a while to register what is strange. I realized his top teeth are short. And even. Like the same length all around. Short. Your gums come down between your teeth, right? Well, that is where his teeth stopped - at that place where the gums between your teeth come to a point. Strange. I mean, can that be natural?

Anyhow, we start talking again, and this is what pushed me to post to the blog again. Turns out he's never been to the Obon, but he has been to the temple. He used to tag the temple when he was a kid. I don't know what "kid," meant, but I got the impression he wasn't a really young child. And they caught him. He said they caught him and they kicked his ass. Seriously kicked his ass. Now I understood why he was happy and amazed. It all made sense. He was fired up because now he is a man and he is back where he had some sense beat into him and things were more than cool. It was out and very in. Then I had to leave him, because they were doing the one dance that will get me in the circle (though it is not really a circle), the Soran Bushi. I tried to get him to give a go, because you have to dance to get the full Obon experience, but he wasn't there yet.

I have no photos of Guzman, but here are a few from the festival. 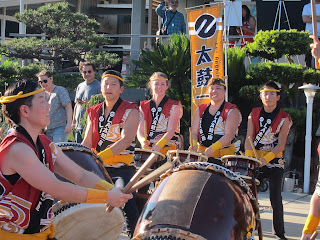 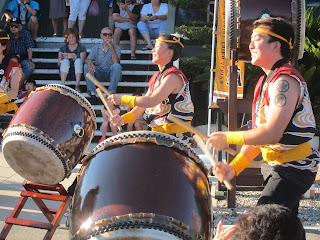 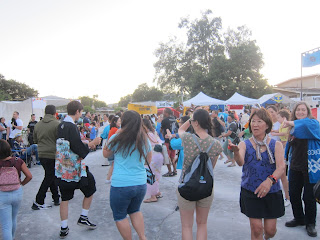 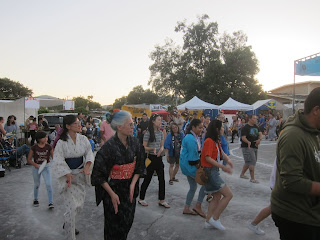 Step back a few days and we are with Purple Gums. We played on LeRoy Downs' "Just Jazz," series. The venue is the Mr. Musichead Gallery in Hollywood. It is worth your while to make a stop at the gallery. They have a lot of great photos and graphics of music greats in all genres. Purple Gums usually does shows on our own turf, so to speak, as in shows produced somehow through Asian Improv aRts, or lecture/demonstrations at universities and colleges, or venues that specialize in the avant guard/experimental/free improvisation acts. Just Jazz presents a wide gamut of improvised music styles, but even given that, Purple Gums is a bit out. People came to see us anyway. It was a good turnout. People enjoyed us. We enjoyed performing. Eventually there will be some documentation up from the show. They are heavy into that. In the meantime, here is a photo or two or three and a link to some previous Purple Gums shenanigans. 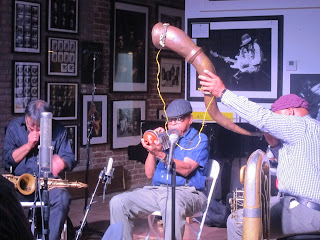 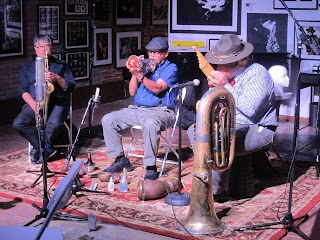 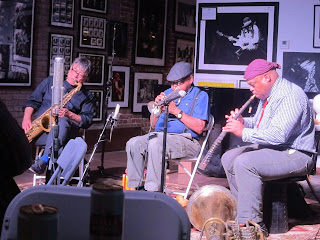 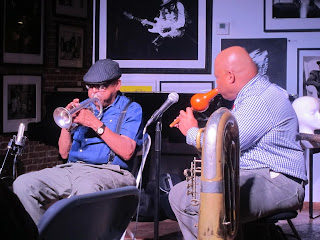 A couple of videos of Purple Gums:
Purple Gums Contemplates
In 2017 we did a recording session with percussionist Brad Dutz. Before too long we will release a downloaded album from that session. Right now you can get a little taste by clicking here:
Purple Gums with Brad Dutz

These last two photos are from a lecture/demonstration that I do for the kids at the Santa Cecilia Arts & Learning Center of the Santa Cecilia Orchestra. I do one or two of these each summer. Some seasons I'll do several in neighborhood elementary schools as part of a program also administered by the orchestra. 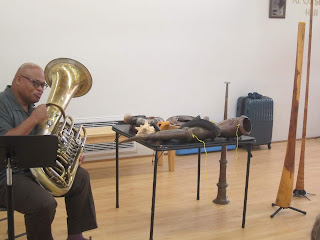 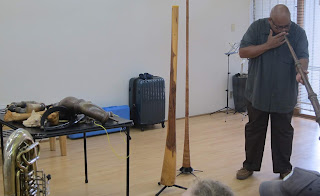 Posted by Roperadope at 11:56 PM No comments: