A Return to "Killer King."

What's been happening? Pretty busy. Last Wednesday (Aug. 21), I did a hit with the Bobby Bradford Sextet at the Santa Monica Public Library on their Sound Waves Series, hosted by Jeff Schwartz. It was a very good show. There is good documentation, but I don't know if Bobby will allow it to go up on YouTube. Members of the septet are Bobby Bradford - cornet, Vinny Golia - reeds, William Roper - lip reeds, Don Preston - piano, David Tranchina - bass, Tina Raymond - drums. We had a good crowd. This show was the first time I played pennywhistle in public. It was a duo with Vinny on clarinet. 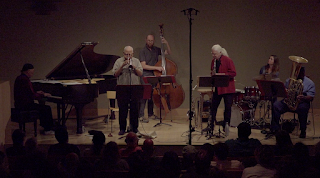 On Saturday (Aug. 24), I participated in another piece (Stay Awake) with the Heidi Duckler Dance Company. Heidi's company specializes in doing site-specific works. This one was at the M. L. King Community Hospital in Willowbrook. Willowbrook is just south of Watts. Everyone has heard of Watts, Willowbrook not so much. This is the second iteration of the hospital. The original one was the King Drew Medical Center. It became known as "Killer King." My mother was one of the people that helped that institution justify the moniker. She should not have died the way she did. She should not have. It was because of deaths like hers that the Feds closed it down. And now, here I was, creating work at the new version of the institution. So far, there are no stories of the old horrors be repeated. Despite some challenges, it ended being a very good show. I was not a composer on this, but a featured performer. As always with Duckler, I created my role. I used six instruments: pennywhistle,  wakrapuku, never lur (first time in a performance), ran singha, conch and helicon.  I was in two scenes. There were two composers for the work: Jessie Cox (out of NYC), Justin Bardales, and 12 dancers.

These shots are from the rehearsal the Saturday before the performance (Aug. 17): 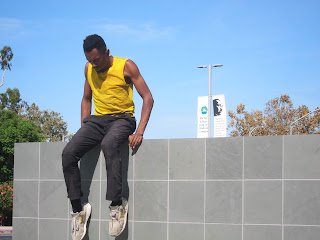 Rob working out his duet.

Shots from the day of the show...


Doing this show provided opportunities to try out some local food stands. 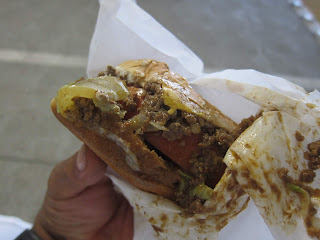 This is the taco burger. It looks messy. It is, but more so, because
it was an hour before I could eat it. The bread would not have been
soggy had I eaten it right away. It was a fun burger to eat.

Then on Sunday (Aug. 25), I premiered a new ensemble for an event called: "Black Music in LA @ WAA - DCA Presenters Showcase." Grand Performances is the entity that hired us. The event was held in Leimert Park. The original request was for Purple Gums, but neither Francis nor Bobby was available. I worked very hard to pull together another ensemble that fit the mold, yet would have an identity purely its own. Ultimately I came up with a trio of Chris Williams on trumpet, myself on tuba, aerophones, vox, and Roberto Lambaren doing movement. The set, like those of Purple Gums, was free improvisation. We did good.

I only got a short video in terms of visual documentation of the performance. I did get a complete audio recording. There will eventually be shots or video from the Grand Performances folks. For now, here are three screen shots pulled from the video. 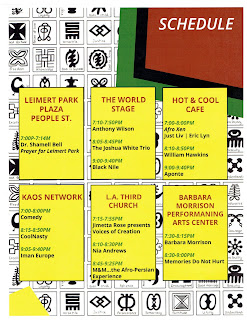 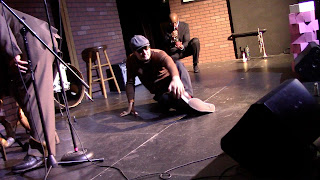 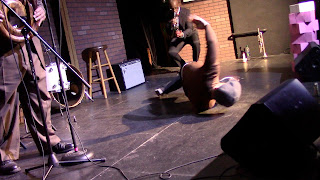 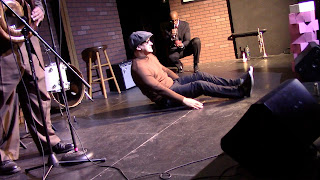 Posted by Roperadope at 6:31 PM